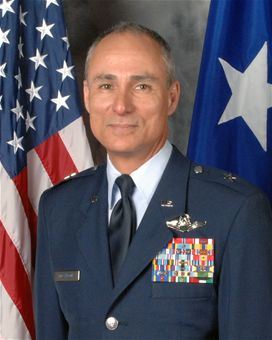 He is a native of Savannah, Georgia, and enlisted in the U.S. Air Force in February 1976. His first assignment was as a CH-3 helicopter mechanic at Shaw AFB, South Carolina, and later worked as a helicopter flight engineer on that same weapons system. He completed his active duty tour in 1980 as a buck sergeant and enlisted in the Air Force Reserve as a flight engineer assigned to Charleston AFB, South Carolina, on the C-141A/B, then Kelly AFB, Texas, on the C-130B and C-5A completing his enlistments as a technical sergeant.

In 1985 he was selected for commissioning and pilot training. He earned his commission from Officer Training School as the First Honor Graduate and completed Undergraduate Pilot Training with a fighter/attack/recon rating. He was a C-5A Instructor Pilot as a first lieutenant and was activated for Operation Desert Shield and Desert Storm. He twice represented Kelly Air Force Base as the Airlift Rodeo Aircraft Commander. He was assigned to the Air Force Reserve Command Headquarters in 1997 to help stand up the Current Operations Air Operations Branch and transitioned to the C-17A. In 1999, he was stationed at Andrews AFB, Maryland, as the C-141B/C Operations Officer.

He attended the Naval War College in 2002, followed by reassignment as the Operations Group Commander at Westover ARB, Massachusetts, flying the C-5A/B. He deployed to Southwest Asia in 2004 supporting operations Enduring Freedom and Iraqi Freedom, flying C-130 combat and combat support missions into Iraq and Afghanistan. In 2007, he was assigned as the Wing Commander at Youngstown ARS, Ohio, flying the C-130H followed by an assignment as the Wing Commander at March ARB, California, where he was senior officer qualified in both the C-17A and KC-135R wing assigned aircraft. During his assignment at March ARB, he was deployed and served as the Deputy United States Forces-Afghanistan and Assistant Deputy Commander Air-Afghanistan stationed in Kabul. From 2012 to 2014, he served as the Deputy Director, Strategic Planning for the Headquarters Air Force at the Pentagon.  He is currently assigned as the Vice Commander of the Joint Enabling Capabilities Command.  During his current assignment he deployed to Al Udeid AB as the AFCENT Director of Mobility Forces. He is a command pilot, having flown more than 11,600 hours in CH/HH-3, C-141A/B/C, C-5A/B, C-130E/H, KC-135R and C-17A aircraft.